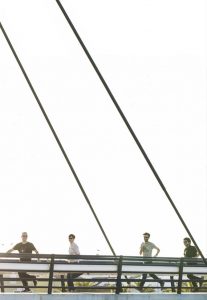 Atlàntic disembarks at Deleste with some of the songs that will be part of their third album. While they continue to savor Volem els ponts their second album, with which they conquered part of the specialized critics and won the award toMillor Disc Pop at the Premis Ovidi 2020. “Discarro de melodías” or “Magistral álbum” are some of the adjectives that the specialized press has dedicated to Volem els ponts, an album that, as reviewed by Ruta 66, “positions the band as one of the rising values of the local scene and with aspirations to the state market in a very serious way”.

In this second full-length album, the band from Valencia wanted to blow up their own working method, so the first thing they did was to bet on direct creation, without preconceived ideas. The album was conceived in trio format in the rehearsal room without previous preparation: ten songs that, in most cases, were born as a result of improvisation. Maybe that’s why Volem els ponts sounds fresher and without so many artifices, although pop melodies are once again the common thread of their second work. The result is ten songs that combine the energy of power pop and catchy choruses, and that also experiment with more introespective songs, far from conventional structures.

The band takes advantage of all their previous background and trajectory in this new Atlàntic album. Volem els ponts has been produced by the band itself and Guillermo Sanz, creator of the powerful, fresh and direct sound that transmits its listening.