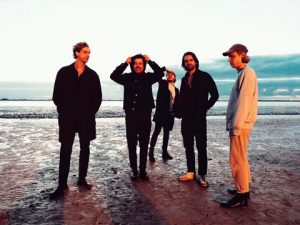 Elegant. Elegant and Sexy. Bathazar’s new attitude looks good. After Fever, a warm and sinuous collection of songs laden with Southern groove, comes Sand, an album that takes exciting new directions and cements the Belgian band’s status as kings of soulful alt-pop. “We felt that with Fever we hadn’t gone far enough,” says co-frontmanager Maarten Devoldere. “So that was the starting point: to take it further.”

Written largely while touring Fever around the world throughout 2019, plans had been made as soon as that record was released. “The idea was always to drop another album as soon as possible,” says Jinte Deprez, Devoldere’s fellow co-leader and best friend and songwriting partner since high school. Refreshed after their solo excursions – Deprez, under the pseudonym J.Bernardt with his Running Days-infused R&B, and Devoldere with the languid, Warhaus-influenced torch song – it was, say the two, “fun to be back together, so we wanted to make as much music as we could.”

The band, keen not to fall back on the past, have drawn on their experience to map out a smooth, cinematic soundscape into which their songs meld. Sand marks several firsts for them, with Balthazar sounding as fresh and energetic as they did in 2010, when their debut Applause wowed critics and audiences alike. And for the fifth album, their masterful command of melody and rhythm is on full display: Sand is unique in the way it combines minimally arranged pop with sleek electronics and sophisticated grooves, with defiant sparks of friction sprinkled generously.

Balthazar never repeats himself, and having excelled in numerous styles and genres – the classic pop of Rats and the swagger of Gainsbourg; the groove-laden indie-rock of Thin Walls – Sand confirms their compositional talent and legacy as fearless innovators and restless creatives. It is also an album imbued with a special sense of balance and grace, and inspired by the joy they find in playing live.

But necessity is the mother of invention, and it led the duo to explore new musical avenues and find creative solutions. “We did a lot of things we hadn’t done before: we’d never used so many drum samples or used bass synthesizers,” Devoldere says. “That was exciting for us, and it worked really well for these songs.” Deprez agrees, “You just work with what you have, and do whatever it takes.”

So for now, like Humunculus Loxodontus, Balthazar must wait, ready to take these songs on the road and spread the joy of live music and human connection. To feel alive. “We just want to share it with people, you know,” Devoldre says, “and we can’t wait to play it live.”