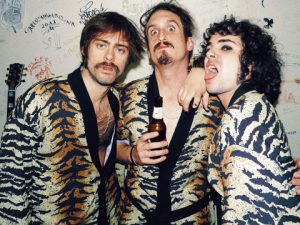 Los Bengala were founded in 2014 in Zaragoza by Guillermo Sinnerman and Borja Tellez, with no other pretensions than to let off steam and make noise together, without knowing that they would end up becoming one of the most exciting Rock projects of the moment. Thanks to their carefree, frenetic sound and their collection of hymns, they were able to make a name for themselves in the national scene.

To date they have released two studio albums, “Incluso Festivos” and “Año Sélvático” and have toured uninterruptedly (except for Pandemic) since 2014. Among hundreds of performances in venues and events of all kinds stand out those performed at major Spanish festivals such as BBK Live, LOW, VIDA, Montgorock, SOS, and Noroeste. In these and many others they shared the bill and/or stages with international music figures such as The Libertines, Brian Wilson, Kase.O, Wilco, The Sonics, Primal Scream and a long etcetera.

The videoclip of his song “Jodidamente Loco” received awards from the Cara B Festival in Barcelona, the Dada Saheb Phalke in New Delhi and the Aragonese Music Award. It was also a finalist at the Music Video Underground in Los Angeles.

In 2021, they left behind the duo format expanding the lineup to 3 members. With Johnny Carlos González on bass and Álvaro Clemente on drums, the new lineup gives off much more forcefulness and dynamism, thanks to the sound of the bass, which completes the previous energy of the band. Los Bengala have not invented anything new, but the truth is that nothing else sounds like them.