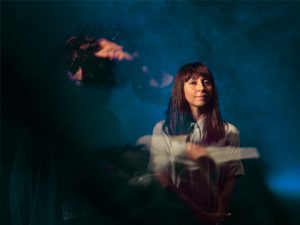 Someone once said that originality consists fundamentally in going back to the origin. That going back to the simplicity of the original solutions, with your own means, gives you the quality of originality with officialdom. Etymologically it is indisputable, of course. Júlia’s third album is the latest and most honest testimony of this theory. Casa is a canvas to the past with sounds of the present; just monument to the classic return to the origins, but from the least common of places and to the most elemental and deepest of its creation.

Júlia’s eternal return is a test of coherence in which each step taken is calculated with care. Casa has the purity of things that are cared for from the very roots. “It is a much more elaborate album compared to previous ones, we have been more on top of the production process than ever”, say Estela and Lídia about a repertoire of new songs that they have built from the foundations of a three-month artistic residency in Alcoi -the project’s hometown-. This accumulation of emotional logic leads to a work whose conception, as transparent as Lars von Trier’s houses in Dogville, inevitably refers to the real home.

Júlia’s last installment is one of reconnection. That of the return after an agitated journey from which lessons have been drawn that can only be understood far from home. In their return, they once again invoke the impossible morphology of the three-faced duo. As already happened in their previous collection, Pròxima B, the magic happens with the appearance of the third element, the one that fluctuates: Javier Vicente, Carasueño. The producer (Tulsa, Alondra Bentley, Calavera) repeats his role of grounding, compass and conducting liquid, walking with Júlia in search of each of the many doors that open in the album.

La Casa de Júlia is a home that overlaps all its times into one, an overlapping of memories and instants in the form of details perfectly arranged throughout its architecture. To achieve this feeling of familiarity, of skin -sometimes so difficult to find in synthetic pop works-, they have opted for the organic approach; even artisanal, from the most traditional point of view. And the proposal works. In their sonic investigation of domestic objects, with which they delved into the composition, they have taken advantage of kitchen utensils, pieces of wood or glass to create sounds that, digitized, continue to maintain their organic and experimental character.

And the voices. The journey through the home built by Júlia en Casa is subtly structured through the particular treatment applied to the vocal section. The goldsmith work with the voices -her voices-, as if they were goldsmiths modulating the gold with their own hands, accompanies the visitor at all times: it is a friendly echo at the end of the corridor that extends throughout the house, from the entrance door to the exit. In a sort of updating of the lares, the family gods worshipped by the early Romans, the vocal craftsmanship in ‘Traditional’, ‘Plom’ and ‘Ut’, among others, guides and protects from strangers during our visit.