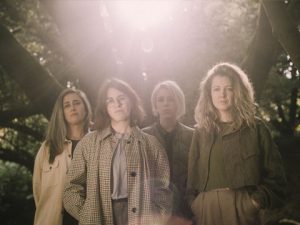 Dublin quartet Pillow Queens formed in late 2016, when they released their first EP, “Calm Girls”. The second EP arrived in 2018, “State Of The State.” The sum of both works already generated a positive background noise: there was there a band of proudly queer young Irish women passionate about social justice, daughters of that faction of their generation that is as concerned about great creative art as it is about social change. First consequences: they opened for Pussy Riot, Future Islands, IDLES. It was time to hit the big time and you knew it was going to be so when at the end of 2019 “Brothers”, the advance single of what would be their debut LP, was released: it was a song that channeled, in a heartbreaking way, the mourning for a loved one. It drew widespread attention, as did the second single, “Handsome Wife,” in July of this year. Soon after came the album, “In Waiting”, which has been released on September 25, 2020, and has confirmed that yes, they are very serious and bring emotions forged through a sea of powerful sounds, a sea of their own that knows how to drink from grunge and 90’s indie-rock, and digest it. A cathartic experience of camaraderie and solidarity.