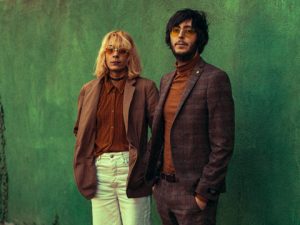 Rufus T. Firefly, the band led by Víctor Cabezuelo and Julia Martín-Maestro is already, despite the youth of its members, considered a cult band within the independent scene of our country. Their energy and deeply sophisticated sound flees from the obvious and builds in each production and live an atmosphere of magic and rock with slips towards a neat and highly addictive psychedelia.

In 2017 they released Magnolia (Self-released, Lago Naranja Records), a plea in defense of art, love and nature in the form of 10 songs meticulously produced by Manuel Cabezalí and Víctor Cabezuelo himself. A precious, risky and ambitious album, marked by the band’s obsession with perfecting their sound and the depth of their textures, always on the fringes of fashion and with the same goal in mind: to create a unique work, as beautiful as possible. This was followed by Loto, which with perspective became the second part of the previous one and with which they managed to consolidate themselves as one of the most acclaimed bands of the scene.

After an extensive tour in our country with a stop in Mexico, the band said goodbye to this stage with a very special concert at La Riviera in Madrid, sold out since months before and with a trip to Chile to present their songs there for the first time.

We will be able to enjoy live their new album, El largo mañana (Lago Naranja Records, 2021), which they have been presenting live in venues and festivals around the country before its release.