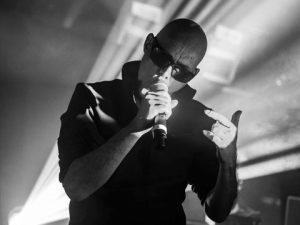 Andrew Eldritch’s band was born in Leeds (1980) under the influences of artists such as Leonard Cohen, Motörhead, The Stooges, The Velvet Underground and Suicide, among others; Cohen himself wrote and performed a song entitled “Sisters of Mercy” on his debut album, Songs of Leonard Cohen, from which the band adopted its name.

They are the biggest, most influential and most prominent dark rock band of all time and are celebrating their fortieth anniversary with a European tour. hey are experiencing a new renaissance with their new lineup, sounding better than ever in the concerts the band has performed in decades.

They promise it will be the best tour with the biggest show they have offered so far. It may be the farewell, perhaps the last great opportunity to enjoy the most emblematic band of English post-punk and creator of some of the classics like Alice, Temple of Love or This Corrosion, marked a whole generation and are history of Valencian musical culture.