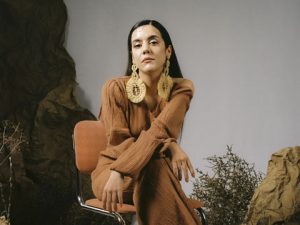 The very young Valeria Castro is the owner of a sensitive, fragile voice, conducive to shivering. Born 22 years ago in La Palma, the third of the Castro sisters belongs to that new generation familiar with the terminology of trap, tanganas, reggaeton or perreo, but her voice, in stark contrast, rises wise, rooted and ancient, as if it came from an older woman with a soul lacerated by the sorrows of life. “I’m not as, as vulnerable as my songs, but I come very close as a person to that same vulnerability. Otherwise I couldn’t be a singer: I would feel like an actress. And I need my identity and my life to match what I then reflect through music.”

On the verge of graduating in Biotechnology, the palm tree tree girl confesses that her life plan is much closer to the stage than to the laboratories. When she was four years old, she began studying at the Escuela Insular de Música de La Palma. One day in 2017 she saw how her networks went crazy: Alejandro Sanz had shared on Twitter one of his videos of versions that he used to hang, accompanied by the text “When talent and sweetness come together things like this happen”. From there begins a path that leads to his first EP, titled chiquita: “I chose it because that’s how I feel, more than shy I am a person with fears, sometimes insecure, and with music I try to grow, feel bigger, but being the first work I wanted to bring it closer to my roots”, which has catapulted him to be in the eyes of critics and the industry as one of the great promises of the Hispanic song. Sensitive lyrics full of memory and honesty, and a very careful aesthetics in each video, accompany a sound impregnated with the musical heritage that weaves ties with the folk music of the Canary Islands.